In Honour of Deryn O’Connor.

Deryn has contributed significant knowledge in her field through teaching, research and publication. She witnessed for herself practices of craft heritage under threat in the world. She was a true researcher of textiles, making repeated study trips to Asia, particularly to Nepal and China. Deryn had a very specific interest in colour on cloth – especially natural dyes – and had a special passion for Turkey red and indigo.

Deryn O’Connor developed a long-standing connection with the Textile Society, both as a member and as an academic. Several UCA Farnham events and study days connected to Deryn’s many research projects were organised for members. These included study days on 18th and 19th century printed textiles with a demonstration of block printing through a collaboration with David Evans of Crayford, a series of lectures on printed shawls, and a practical workshop in resist-dyed papers and embroidery techniques related to Miao costume. Textile Society Honorary President, Mary Schoeser writes, ‘I first met Deryn when I was the Warner Textile Archivist and Deryn visited to select items for her Colour and the Calico Printer exhibition. Frequently, Deryn was helpful in providing information and images for my publications’. These included 20th Century Fabrics and Wallpapers (1986), English and American Textiles (1989), French Textiles (1991), and Bold Impressions: Block printing (1995) for which Mary noted that, ‘Deryn offered advice on the work of Joyce Clissold, and she was there to answer questions when I curated Ain’t We Got Fun (1993), an exhibition of 1920s mixed media at the Royal Festival Hall’.

Jane Callender, shibori artist and indigo dyer, and speaker at the 2018 Manchester Vintage and Antique Textiles Fair, is just one notable former student whose career has been influenced by Deryn. Contemporary textile artist and UCA Farnham BA Hons Textiles course leader, Sharon Ting, was also tutored by Deryn, as was the Textile Society’s Vice-Chair, Linda Brassington, whose current doctoral research on resist-dyed textiles is informed by Deryn’s knowledge and experience. Following her retirement, Deryn continued her commitment to textiles through adult education. Using examples from the UCA Farnham collection, her classes encouraged others, including the society’s Honorary Member, Freda Chapman (and members of the Quilt Study Group), to analyse cloth and to develop an appreciation for the social and historical significance of textile dyeing and printing.

Deryn was instrumental in bringing a range of dyed and printed textiles to the UCA Farnham Textiles Collection, collating important items from the Muriel Rose bequest and the Barron and Larcher source collection donated by Robin and Heather Tanner. It is significant that Deryn continued to source and purchase items for the collection following her retirement. More than sixty textiles in the existing collection were gifted by Deryn. These range from twentieth century Primavera prints to Turkish embroideries collected by the important ceramicist, Henry Hammond, and an example of 19th century printed velvet by Thomas Wardle.

Consequently, The Textiles Collection is a representation of Deryn’s discerning eye and critical judgement, and it is highly appropriate that her personal collection should come to UCA Farnham.

Ella McLeod, founder of the Textiles course at the former Farnham School of Art, appointed Deryn to lead and develop printed textiles at undergraduate level alongside weave. During her extensive career, Deryn took printed textiles from a subsidiary area to a specialist subject, which is studied equally with woven textiles prior to specialisation. Deryn’s educational philosophy was focused on developing a knowledge of materials and processes through practice. She fostered in students a confidence to creatively explore on cloth and to innovate new ideas in textiles with real understanding.

Deryn witnessed for herself practices of craft heritage under threat in the world. She was a true researcher of textiles, making repeated study trips to Asia, particularly to Nepal and China. She had a very specific interest in colour on cloth – especially natural dyes – and had a special passion for Turkey red and indigo. She has contributed significant knowledge in her field through teaching, research and publication, most notably in her exhibition catalogue Colour and the Calico Printer (1982). Mary Schoeser writes, ‘That exhibition was ground breaking. There really hadn’t been anything that looked at colour (rather than pattern) before that’. This was followed by her catalogue for the exhibition Miao Costumes from Guizhou Province South West China (1994), and it is significant that in 2009 Deryn gifted her extensive collection of Miao textiles, gathered over a decade, to the Pitt Rivers Museum at the University of Oxford where she was a former graduate in Philosophy, Politics and Economics. Deryn shared her knowledge and experience with many other artists and researchers – writing the foreward to Susan Bosence’s Hand Block Printing and Resist Dyeing (1985), collaborating with the textile archaeologist and researcher Hero Granger-Taylor on several projects, working with the quilt historian Bridget Long, and serving on the Acquisitions Committee of the Crafts Study Centre.

In 2006, the Textiles Collection was awarded the Textile Society Museum and Archive Award of £1,000 to support the collection as a digital resource on the Visual Arts Data Service which can be viewed at VADS Online Resource for Visual Arts.

In 2019, the Deryn O’Connor bequest will become a rich addition to the collection.

Middle to late 19th century French scarves produced by the ‘lapis’ process on cotton.
Deryn O’Connor notated a complex sequence of between 12 and 16 block prints of paste resist and mordants, with immersions in indigo and other natural and Azoic dyes.
Image 1: Accession No. 8051
Image 2: Accession No. 8048
© The Textiles Collection, University for the Creative Arts at Farnham 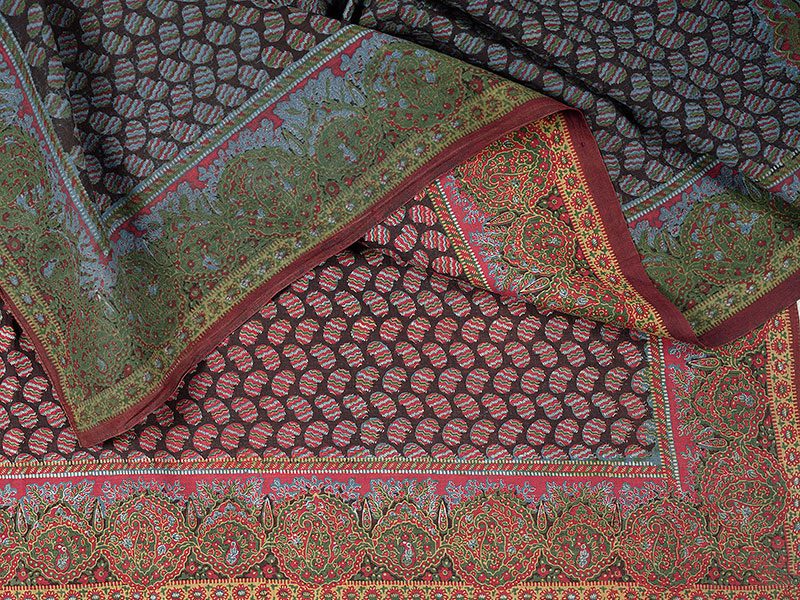